Hire Santa Claus for a home visit in the Louisville area

Hire Santa to hand out gifts at your family gathering

Have Supper with Santa
Cookies with Santa - making/baking with you

Hire Santa for your Christmas parade 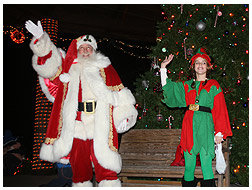 Santa Tom has a Master of Santa Claus from the International School of Santa Claus, the world's largest international school for Santas. It is a renowned school and been seen and featured on NBC, CBS, CNN, Fox News, The Discovery Channel, National Geographic, The Travel Channel, The History Channel, over a dozen documentaries and featured in the Wall Street Journal, Los Angeles Times and over 200 other news articles, radio and television news stories. 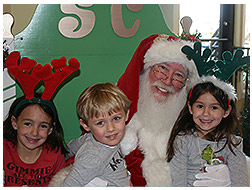 Santa Tom has been entertaining young and old as Santa for over 20 years. He has 4 children & 6 grandchildren of his own. He has have performed for a national photo studio (CPI), at large and small parties, restaurants such as Mark's Feedstore, Captain's Quarters, Bravo Cucina Italian and Verbena to name a few. Santa Tom has also entertained for major corporations and companies such as UPS, Norton Commons, Home Builders Association (Homearama), Ft Knox & apartment complexes (Summit Place).

Santa Tom enjoys contributing to his community through volunteer work for Hosparus, Lions Club (featured on their magazine cover), and many church and school functions.

The beard you see in the pictures is REAL. Many children try to tug on Santa's beard to settle their doubts. Santa Tom is authentic and has won the hearts of many skeptical youngsters.

If you want to hire an experienced, trained Santa, a warm jolly soul who will bring joy and the spirit of Christmas to your event, then give Santa Tom a call at (502) 290-4376.